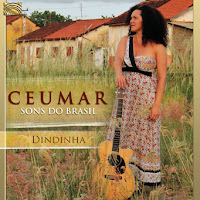 
Songs of Brazil is one of those albums where sweet revelry meets sensuality, and at times melancholy such as on the titular track, which speaks about the Portuguese “sodade” a term not easily explained in English--a longing sadness comes close.  Fans of the late Cape Verdean vocalist Cesária Evora will recognize this beautiful song.  And boy does this song set a mood!  You could have felt delight before you heard it, then bam, you’re feeling longing just like the vocalist.  The following song, O seu olhar also sets a mood, but a sensual one.  Even if listeners don’t understand a word of Portuguese, they’ll recall the first time they fell in love while listening to this tune.


Don’t let the sweet and lilting melody of Boi de Haxixe fool you because this song portrays a psychedelic trip, not that anyone would feel like they’re tripping when they listen to it.  Rosa Maria tells us about a seductive woman that combines culinary skills with witchery--the stuff of a magic realism book or movie.  With regional accordion ripping through the fast-tempo groove, we might feel like we have fallen under the spell of passion fruit.  Rosa Maria must have been some woman to inspire this fabulous song.  Boca da Noite sets a romantic mood with a dreamy slow tempo that causes the body to sway in response.  “He might blow up the earth, melt the snow just to find the ‘mouth’ he is longing for.”


The musicians put a lot of heart into each of the songs on the CD and carefully arranged each of the tracks, while creating lushness out of chamber music.  Ceumar has a voice that not only caresses ears, but seduces them.  It doesn’t hurt that she sings in a romance language that conjures the sea, sand, and the warm rays of Brazil.  Anyone who listens to this song during the colder and grayer days will chase blues away and experiences carnival dreams, if not downright sexy moments.