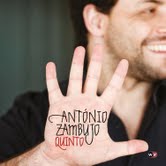 
The waves of the Atlantic ocean, lost loves, and family nostalgia color the poetry of Portuguese fadisto Antonio Zambujo’s second World Village release, Quinto.  Certainly, you can hear the trembling, aching fado voice here, but you can also hear strains of Brazilian bossa nova.  I watched a few of Zambujo’s live performances on YouTube where the artist collaborated with a Bulgarian women’s choir, a duet with Raquel Tavares and a performance with a Portuguese traditional men’s choir, Rancho de cantadores da Aldeia de S. Bento (who also appear on What has become of her? on Quinto).


Clarinet, Portuguese guitar, ukulele (which finds its origins in Portugal), classical guitar and double bass accompany Zambujo’s sexy vocals.  Flagrante sounds like it came out of Brazil’s Bahia region with its lilting rhythms and spritely melody.  José Miguel Conde’s clarinet takes a Brazilian flavor too and only the shimmering Portuguese guitar and ukulele (cavaquinho) remind us of the song’s Portuguese origins.  A Day is worth no more sounds like an American jazz standard or even an Elvis Presley ballad sung in Portuguese.  However, if you hunger for fado, then listen to The Edge of Night, which recalls old school fado, and the two opening tracks, Disconcerto Fado and The Abandoned House.


I’m happy to include this new fado voice in my small collection of fado CDs.  Although I have heard fado sung by men previously, this marks my first review of a fadisto (fado singer).  This could easily become a habit, especially, if the men possess the velvety elegance of Antonio Zambujo.  He’s not just a fado singer, but a musician with world music in his hands.  And with his versatility and willingness to explore global music traditions, listeners expand their musical worldview too.


http://www.worldvillagemusic.com
Posted by Moon Child at 9:48 AM