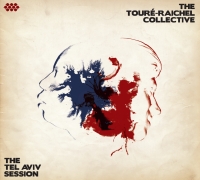 With so many Malian-music collaborations to choose from these days, it is still not a cliché to introduce yet another.  Malian blues guitarist Vieux Farka Touré teams up with Israeli pianist Idan Raichel.  From what I can tell from the press notes, neither musician has collaborated on an acoustic jam session previously that combines the earthiness of Malian music with Middle Eastern modes.  In fact, these musicians are superstars of world pop and rock, but The Tel Aviv Session, sounds more new age than anything else (new age in a good way).  I find this album deeply relaxing alternating with invigorating.

On the opening track Azawade, Raichel’s piano arcs over Touré’s bluesy chord progressions, reminding me of angels descending to the red earth.  Backed by Yossi Fine on bass, and Souleymane Kane on calabash, the only other musician that comes to mind is Taj Mahal, who also weds the truly sublime to bluesy progressions.  For those of you not yet familiar with Malian blues, it celebrates the human spirit and in comparison to the more cathartic American blues, Malian blues uplifts without taking you through the mire first.  Of course, Tinariwen and other Tuareg blues bands from Mali perform a more devastating blues, then what appears here.  As far as I can tell, the only agenda Touré and Raichel had was to exchange musical ideas in a studio setting to see how far they could take it.

There is enough groove here to keep the world music fan hooked, but also enough sophistication and innovation to excite the music academics.  While I am not going to wax on about chord progressions, modes, and Middle Eastern scales, I leave it to the savvy listener to buy the CD.  Everything from Frédéric Yonnet’s harmonica solo on Touré to Malian chanteuse Cabra Casay’s soaring vocals on Ane Nahatka, listeners are in for a one-of-a-kind musical experience.  The entire album provides magical moments, leaving me breathless at times.  I think 2012 is already the year for spectacular music, but world music fans and journalists will talk about this seminal album 20 years from now.  Some albums changed lives and some albums change the course of music history--this is one of them.

http://www.cumbancha.com
Posted by Moon Child at 10:27 AM